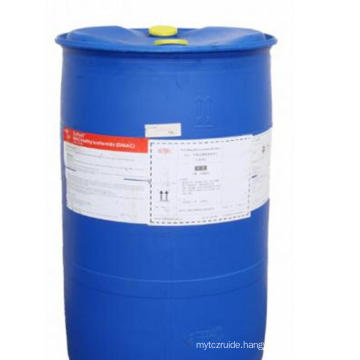 Pharmaceutical N-Dimethylacetamide with CAS No. 127-19-5

Application
Used as raw material for synthetic fiber and excellent polar solvent for organic synthesis
For organic synthesis, also used as a solvent, catalyst and paint remover
DMAC is mainly used as a solvent for synthetic fibers (acrylonitrile) and polyurethane spinning and synthetic polyamide resins. It is also used for the separation of phenethyl vinyl ether extractive distillation solvent from C8 fractions, and is widely used in polymer films, coatings and pharmaceuticals, etc. . Currently used in medicine and pesticides for the synthesis of antibiotics and pesticides. It can also be used as a catalyst for reactions, electrolytic solvents, paint scavengers, and various crystalline solvent adducts and complexes.
Reaction solvents for pharmaceutical synthesis, solvents for synthetic fiber spinning and synthetic resins, solvents for photosensitive chemical coloring agents, and solvents for coatings. catalyst.

We look forward to establishing good cooperation with you.

We supply different kinds of products. High quality and favorable price. We're pleased to get your Inquiry and we will reply you as soon as possible. We stick to the principle of " Quality first, service first, continuous improvement and innovation to meet the customers" For the management and " Zero defect, zero complaints" As the quality objective.

Email to this supplier